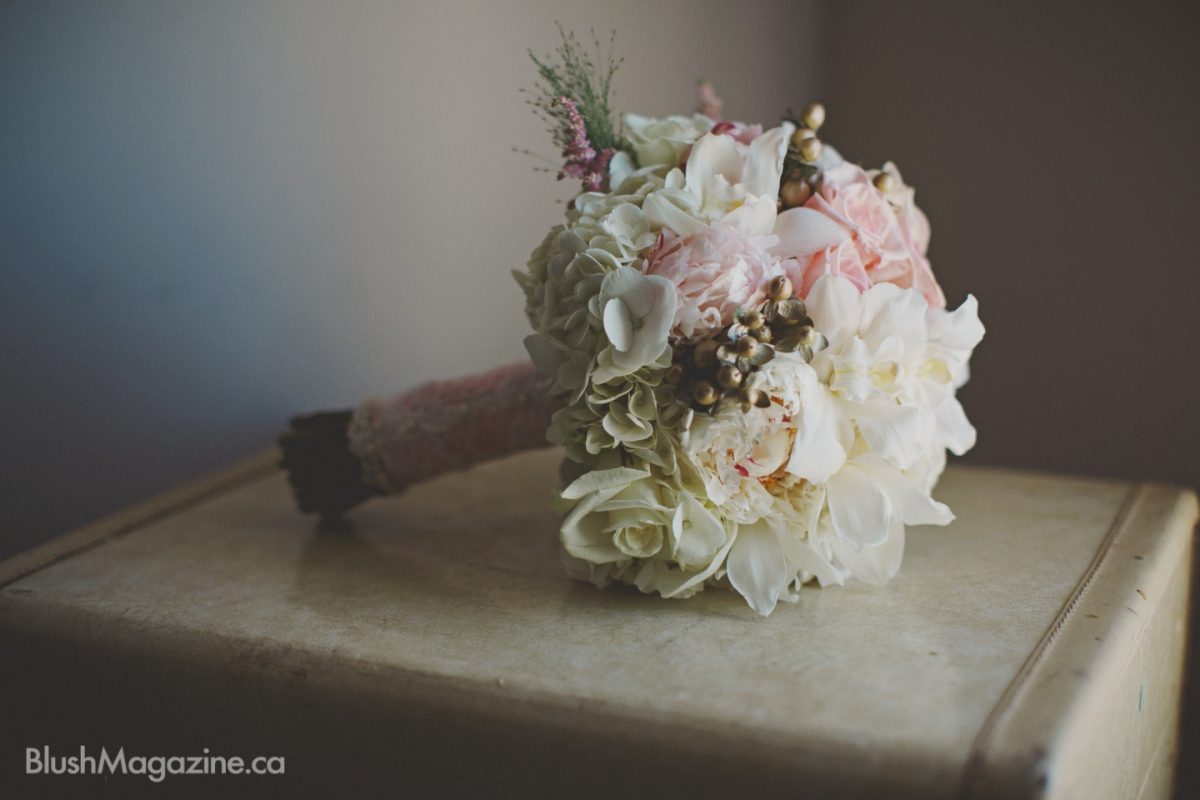 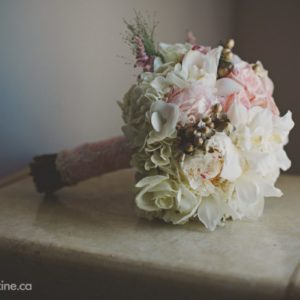 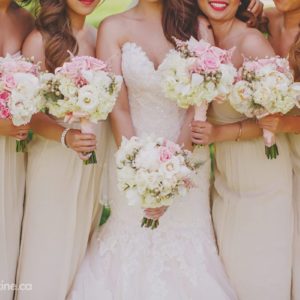 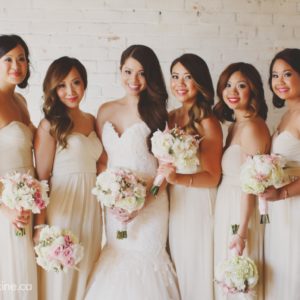 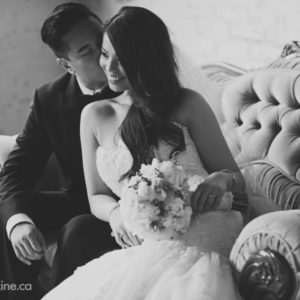 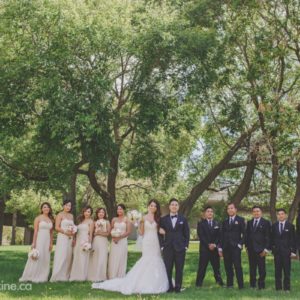 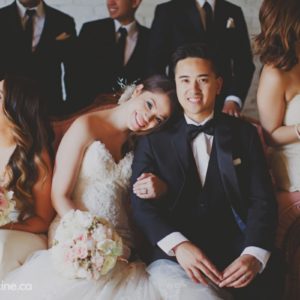 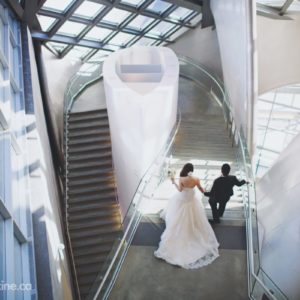 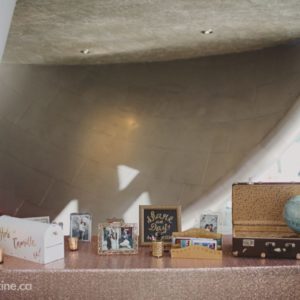 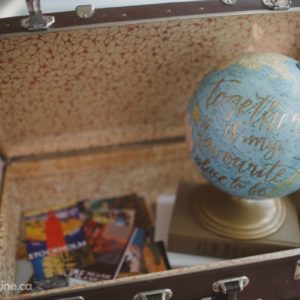 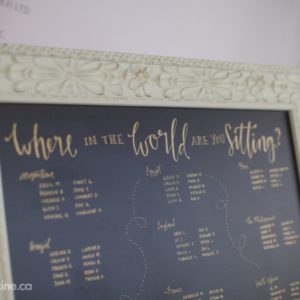 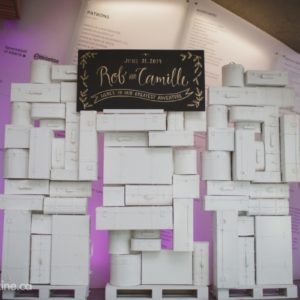 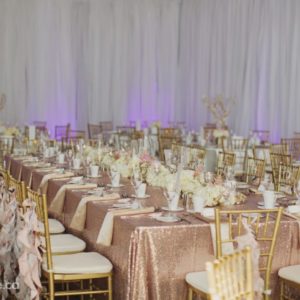 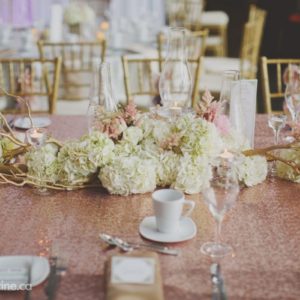 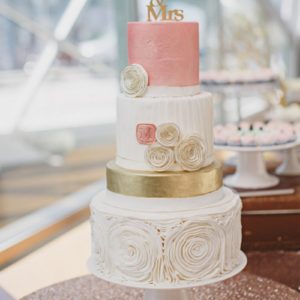 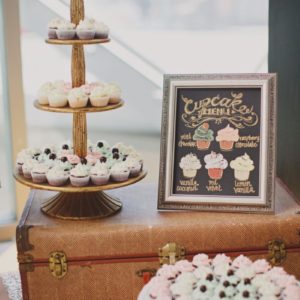 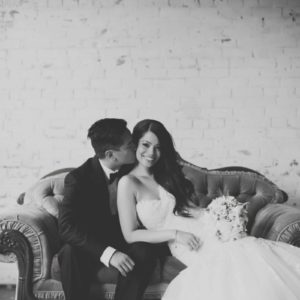 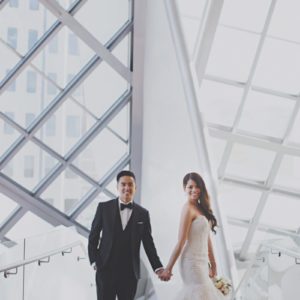 Camille and Rob weren’t high school sweethearts–they called it quits after two months. They remained friends until six years later when they backpacked across Europe together, and that’s when they fell in love.

When they were just friends, Camille and Rob started their “Christmas Date” tradition. One year before dinner, Rob took a detour to the City Centre Airport for “a work related matter.” In the middle of the hangar, surrounded by Christmas lights, sat a table set with candles and a sushi dinner–a throwback to their first “Christmas Date”. Camille was so shocked she missed most of Rob’s proposal speech, but she (eventually) said “yes.”

Initially Rob & Camille planned on having a destination wedding but they quickly realized how important it was to have all of their friends and family present, so they opted for a local wedding and showcased their love of travel through all of the details. They had guests write on vintage postcards rather than a guest book, named their tables after countries they had been to or planned to visit, and used vintage suitcases as the backdrop for their photo booth.

Camille and Rob also chose venues that were special to them; they often attended Sunday mass at St. Joseph’s Basilica and they have gone to Zinc in the Art Gallery of Alberta for the past three Valentine’s Days.

As added bonuses, Rob was excited to be wedded in the same place as The Great One, Wayne Gretzky and the AGA was a central location for all of their guests.

Camille: “For as long as I have loved and dreamed of marrying Rob, the idea of walking down the aisle to meet my soon-to-be husband brought tears to my eyes every time I thought about it. I’m happy to report that moment did not disappoint! I was emotional when the processional started as I heard the violin playing Canon D and eventually, ‘All of Me’ by John Legend, the song I would walk down to. When the doors opened just as I was about to proceed down the aisle, I was swept off my feet to see Rob standing on the altar with the biggest smile on his face looking as handsome as ever (and choking back tears, of course!). For a small snippet in time, it was just him and I, eyes locked and incredibly happy that this moment had finally come. I had months to practice holding in my ugly cry and I did so gracefully. I get chills every time I relive this moment in my head!”

Rob: “It was the tail end of the night and Camille and I were walking through downtown towards our hotel. As we stumbled through our exhaustion, we laughed and smiled with bittersweet emotion at the fact that the day we had been waiting so long for was finally over. After laughing at our friend who jumped into the pool at Churchill Square, we said good night to our friends and family who lasted till the bitter end. I went to bed knowing that tomorrow was going to be the best morning of my life to date, as I would wake up a husband to my best friend.”

“It’s not often that you get an opportunity to plan a celebration to this scale so enjoy every single moment. Build good relationships with your vendors and most importantly always be on the same side as your partner.”

“Although we’ve been together for six years, we’re excited to learn more about each other as we grow into one of those sweet old couples that take forever to cross the street (like Ellie and Karl from “Up”)! And of course, we’re looking forward to more adventures and exploring even more of the world as husband and wife.”